Africa is inspiring. I am constantly lost for words, overwhelmed and blown away by the spirit of the people in this place. There is so much to absorb, so many wonders around every corner that it is hard to keep track of them all. I am a child again. Muddy feet and wide eyes, everything is new. I truly love it here.

Sitting down and trying to capture it all is a challenge but I will attempt to rise to it, to bring this place to life for you all wherever you may be. At first it was a little daunting, trying to work out what exactly we was best for us to do and we quickly learned that there is no such thing as a direct answer around here. Life is not black and white but shades – time is flexible, schedules are constantly shifting (if they exist at all), you start one thing and then find yourself half way through another, spontaneity is the name of the game and yet there is some kind of organised chaos in which everything gets done in the end somehow, in someway. You soon let go of any attempts to pin this place down, it moves to the beat of its own drum. 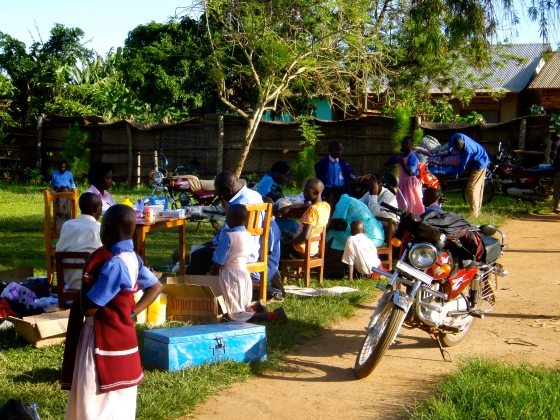 School has begun. Monday saw a flurry of activity as children arrived on the back of motorcycles, bicycles, some lucky enough to come by car but the vast majority on foot. The arrival of the students meant a flood of sugar, laundry soap (used for washing: clothes, dishes and people), books, sugary toothpaste, razor blades (used for sharpening pencils, cutting fingernails and shaving hair), pens, pencils, safety pins, brooms (bundles of tied-together straw), hoes (?!) and of course jelly – the wonder cure which boasts to fix pretty much any illness, including every kind of rash imaginable. I’m sticking with my talcum powder for now… The arrival of the children was exciting and heartbreaking at the same time. So many of them were without parents, without school supplies and or any money to pay for them. We soon learned that there was no set rule as to who paid what – or didn’t pay at all and so we quickly resorted to stacking the supplies and left the decisions to the teachers. The school is now filled with laughter. The children are so spirited, so excited by everything and they never stop laughing. There is so much joy here, it is contagious. We are still only half way through receiving the students but by next week we will be: 623 children, 19 teachers, 9 cooks and matrons, Dominic, Rose and 3 muzungu. We are quite a sight. 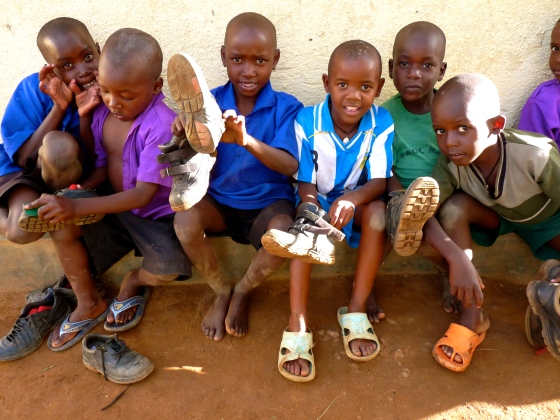 So now that there are children in the school I guess it was not surprising that we were asked to begin helping in the classes. Our first lesson was hilarious – we were approached by Teacher Dora to assist with that morning’s P.E. class at ‘10 o’clock exactly’. There is no such thing as exactly around here. So, long after 10am, we found ourselves standing in a field more hole than field and with slightly disconcerting bricks to dodge, looking at a sea of expectant 6-year-old faces. We soon realised that we were not helping with the class, we were the class. A bit of head scratching and next thing you know there are 50 children running around shrieking with laughter playing Duck, Duck, Goose! An old primary school favourite. The next delight was ‘What’s the time Mr Wolf?’ All these little voices ringing out across the field was something I will never forget as they all tried desperately to sneak up on us without falling over in their excitement. It seemed incredible that despite barriers of language, culture and continent, there we were, three Kiwi girls sharing games and laughter with these gorgeous children under the scorching African sun. 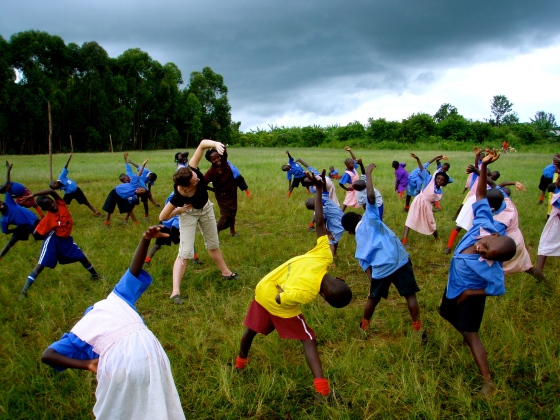 As amazing as that was, the highlight of my time here so far came when Teacher Dora, clearly blown away by our incredible teaching skills, asked us to take the music class. It started in one hour. One hour-ish. Next thing I know I’m walking into a noisy classroom carrying my guitar and hand-written song words on coloured paper. The room went silent like I have never heard silence and suddenly hundreds of little eyes were on me and my guitar – they had never seen this strange instrument before and they were mesmerised. We ended up with fifty amazing voices singing ‘Twinkle, Twinkle Little Star’, grinning from ear to ear, a memory that will stay with me forever and always. From there we launched into ‘In the Jungle’ and before I knew it, there were all these little bodies swaying from side to side and clapping perfectly in time. We would get through the verses and I would shout ‘wimouwae’ and they would grin and start clapping again as they launched into their beloved chorus. I have not sung so loudly or laughed so hard or felt so good in a long time and for the second time today I felt that if this was all I did here it would have been worth every second.

One hilarious aspect of cultural difference has come from my name. When I first arrived, Dominic was surprised as he was expecting a man instead. This is understandable with a name like Blackman, which had already created a great deal of entertainment for the customs officers. But the real cause of amusement turned out to be much more confusing. One day during school registrations I asked a mother the names of her four children. One of them was Emma. I piped up with excitement – my name’s Emma! Which one is Emma? No one seemed very forthcoming in telling me and I finally worked out why – her son was called Emma. Here, Emma is a boy’s name. Hence Dominic’s confusion: Emma (boy’s name) Blackman. I didn’t stand a chance! Yesterday in the markets we made some new friends (i.e. people trying to sell things to us) and we were asked our names. When I replied that my name was Emma I was met with ‘Are you a woman or a man?’ I had hoped that my skirt, long blonde hair and maybe other features had indicated the answer to that question. Clearly not. I may as well just shave my head and start wearing trousers…

In spite of this, each day I feel more and more a sense of purpose. There is so much to be done here but so much contagious energy with which to do it. I feel as if I could write forever but I will leave it here – and save the rest for the book I am writing by torchlight under my mozzie net at night once the generator has gone out. 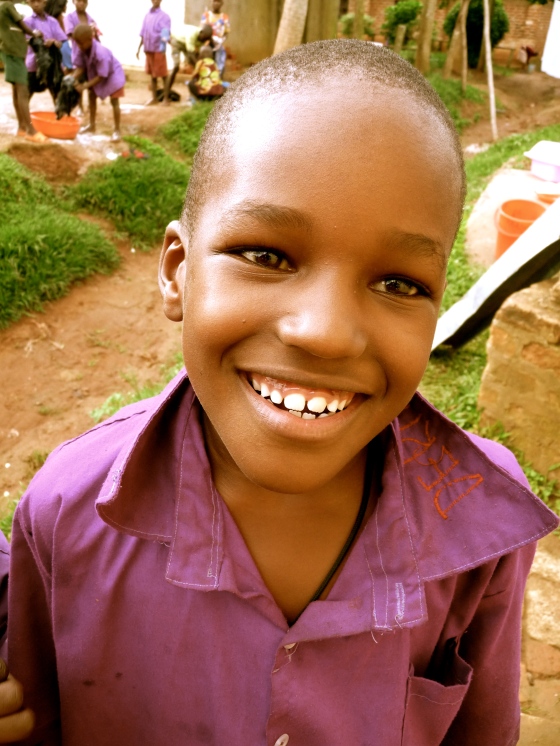