On this, my final day in Uganda – for now – the heavens have opened and the rains are falling. Unfortunately not on the crops of the village but on the capital of Kampala, where rivers of mud flow through the streets and the traffic has come to a standstill. It’s hard to believe I have come to the end of my time here, and this past week has been full to bursting, trying to fit in every last minute task on my list, saying a thousand goodbyes and sharing countless hugs.

Last Saturday we had a wedding at KAASO for some of the school’s neighbours who tied the knot on our school field. In the days leading up to the wedding the school was a hive of activity, with friends and relatives arriving throughout the day and night and Rose and Teacher Sarah running around preparing mattresses in the classrooms to house the onslaught. I was dressed in one of Rose’s beautiful satin gomesi, the traditional Ugandan dress, and was inundated with praise for how smart I looked from every man, woman and child. A muzungu in a gomesi causes quite a stir in the village.

A Ugandan wedding is like nothing you have ever seen. Over 1,200 chairs were lined up under circus-top marquees and strings of lights, flowers and lace criss-crossed in between, leading up to a giant central maypole. No sooner had the bride and groom entered with their entourage, than the rains came crashing down. Thunder and lightning filled the sky as over a thousand of us tried to squeeze under the sodden tents. I had Brenda with me and we huddled together until the tent looked set to crumble and the water was past my ankles; we decided to make a run for it. We splashed our way across the water-logged field and took refuge in one of the classrooms, where dozens of others had had the same bright idea. Taking a seat on a damp mattress on the floor, Brenda promptly fell asleep in my lap while we waited for the rain to stop. Two hours later, the skies cleared, the marching band recommenced and the festivities continued. We ate and drank and danced until I finally snuck away with Brenda to get some sleep, waking at 5:30am to hear the music still blaring from the field. Ugandans sure know how to celebrate.

Before coming here, I had had a generous donation from a friend who suggested I throw a Christmas party for the children. I ran the idea by Rose and it was quickly decided that we would use this occasion to bring together all the sponsor children to celebrate, along with those few children remaining at KAASO for the holidays. Rose and I hit the Kyotera markets, buying sacks of rice, bargaining for bunches ofmatooke, selecting tomatoes, avocados, cabbages and potatoes. In the midst of it all, the car broke down and several hours ensued with me at the garage, somehow having lost Rose, driving around Kyotera in circles, eventually finding her at a roadside stall where she’d gone to visit Dominic’s sister. It was dark by the time we got back to KAASO where I was grateful for our team of helpers who magically appeared to unload the car for us.

The day of the Christmas party, we awoke at dawn. Sacks were laid across the dirt courtyard, giant cauldron-like pots lined up, fires were lit and the peeling began. The sponsor girls were responsible for the food while the boys slaughtered chickens then decorated the school ‘hall’ (three of the classrooms with the wooden petitions removed). I made myself scarce for the chicken slaughter but enjoyed helping with the decorating. I had bought Christmas decorations while in London staying with my brother and the children delighted over the flags, banners, streamers and mini Christmas trees I pulled from my bag. 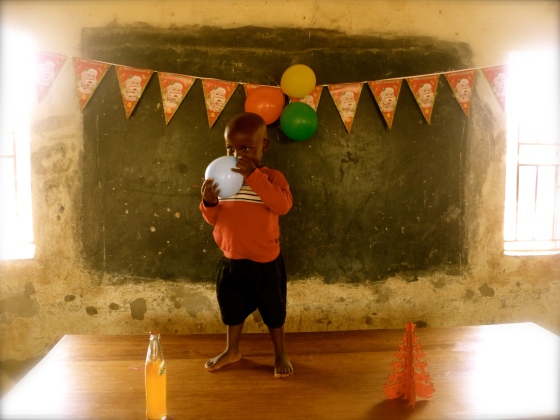 END_OF_DOCUMENT_TOKEN_TO_BE_REPLACED

Who would have thought you could be so busy in a small Ugandan village but the past two weeks have been filled to bursting. During that time I have travelled for miles and miles along dusty, bumpy roads, visited over a dozen families, been showered with thanks, met armies of relatives, drunk countless cups of tea, and been gifted more chickens than I care to remember. Fortunately Rose now knows to intercept these squawking chickens that so often come my way, graciously accepting them on my behalf. It’s funny to think this whole journey in 2009 started with a chicken flying from the boot of Dominic’s car as I bent to offload my heavy backpack. And here I am now, almost 5 years later, still up to my eyeballs in flapping chickens. Some things never change.

Since I last wrote, the school has almost completely emptied out, leaving a small group of children either related to Dominic and Rose or fully orphaned with nowhere to go. Some of the the sponsor children have also come back to KAASO for the holidays to help out around the school – and because it feels like home. The other day Dominic and Rose’s daughter Rhonah came home from school with Teacher Sarah’s son Joy. They had with them their report cards and when Joy passed his over to Teacher Sarah I thought she was going to faint. She shrieked for joy, embraced her son and then, fanning herself, sat down heavily. I looked at the report card shaking in her hands and saw what she saw – Joy was top in his year with percentages in the 90s for every subject. I sat next to her and she just shook her head, smiling to herself, taking it all in. Once the shock had worn off she turned to me, her face full of pride. ‘Madam Emma, my son – first! In that good school. I’m just a simple girl from the village and that school, eh! The children of people with so much money, people from Kenya, Congo – overseas countries. Big people! And it’s my son from the village, he is first. Of all of them. Can you believe? Eh!’ She shook her head, smiling, soaking up the wonder of it all. It was a beautiful moment.

Yesterday I completed the last of my visits to the 12 Kiwi sponsor children and thus ended a chapter of joy, wonder, heartbreak and humility. Everywhere we went, we were welcomed into homes, made to feel part of the family, showered with love and offered all the food they had to give. 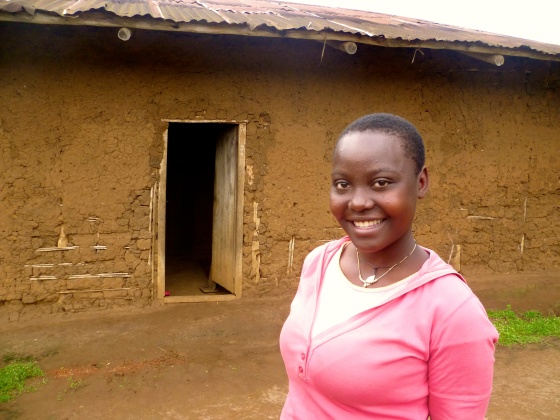 There was Justine, a girl whose parents are both living HIV positive so sent her to live in a neighbouring mud hut with her aunt who looks after her and three of her grandchildren whose parents have either died or are unable to care for them. There was Caroline, who was out tending to her cabbages when we arrived, whose mother took me in her arms and embraced me with all her heart, introducing me to the 8 other children who live with them – abandoned, disabled, unwanted children left to this big-hearted woman to care for them.

There was my lovely Henry, whose father died when he was 6 years old but who was brought up by his loving mother who cooked for us a feast as large as her smile, insisting we enjoy the fruits of her labour from their gardens. A two hour drive followed by a half hour trek brought us to the home of Charles who lives in a little house on a hill with his Rwandan grandmother – he does not know whether his mother is dead or alive and his father tragically died of AIDS in 2010. His family literally fell upon me in flood of tears, thanking me for helping to support Charles, the grief still so raw within the stark concrete walls of their home.