Five years ago when I was first in Uganda, the idea of Dominic going to America seemed about as likely as me becoming a pole vaulter. He was born and raised in Uganda and had dedicated his life to helping the children of the area in which he grew up. The only time he ever left Uganda was to cross the border into Tanzania at the start of each school year to pick up the handful of Tanzanian orphans who boarded at KAASO.

However, last year the National Educator Program (NEP) of the USA heard of Dominic through a past volunteer and invited him to present the story of KAASO at an educational conference in California and then attend a leadership workshop in Florida. Within the USA, his food and accommodation would be covered by NEP but it was up to us to get him there. Kirsty and I launched a fundraiser and thanks to the generous support of family and friends, in particular Judy Johnson and Iain Percy, we raised the money for his flights. Kirsty, Justin and other volunteers helped Dominic through the arduous US visa process and we were happy to learn that Dominic had already obtained a passport a few years earlier in case the chance ever arose to head overseas.

Arriving in the USA on 29th June 2013, Dominic was taken under the wing of Mark Thompson, the inspiring Executive Director of NEP, who guided him through American life and introduced him to people from around the world. Despite being far from Uganda and all those he knew and loved, Dominic tackled life with his usual optimism and exuberance and all who met him were blown away by his charisma – and by the incredible story of KAASO. He made many great connections and formed a sister school partnership with a primary school in Flordia who have since donated 21 laptops to the KAASO computer lab. He learned about new teaching methods and the concept of ‘career academies’ whereby students are encouraged to learn practical skills which will help them in life and not just academic teachings. This has been implemented at KAASO in the form of the self-sustaining poultry project which is largely student-run, helping educate the children about how to generate an income alongside their studies. There are many other exciting projects that KAASO one day hopes to launch such as a bakery and a local coffee processing plant.

Not only did Dominic introduce these ideas to KAASO, he also shared them with Zaake Secondary School, Ssanje Primary School (the government school at which Dominic is also head teacher), presented at various community meetings around the district and was invited to State House to give an account of his trip. In Dominic’s own words:

‘Attending an international conference has changed my thinking, my way of life and even my status in the society. So many people are consulting me.’

All in all, the trip was an incredible success and Dominic, KAASO and the community at large have greatly benefited from his experiences.

So when Dominic was invited to return to the US to complete the second part of the International Leadership Fellows Institute he began last July, I knew he had to take this opportunity. The course is ‘a year-long professional program designed to challenge and strengthen exceptional candidates. The Institute’s goal is to develop principals with the knowledge, skills, and vision to lead progressive, innovative schools where teachers are empowered to be leaders and all students have equal access to success.’

Thanks to the generous support of Nathan Outteridge, Dominic will be flying out next Saturday to Tampa, Florida, to complete the final stage of this two-part course. Mark Thompson will again be mentoring Dominic through the process and helping Dominic to build on the relationships and connections he formed last year.

I am excited to follow his progress and look forward to hearing about all he will learn, experience, see, and ultimately share with the KAASO community.

Dominic wrote to me saying, ‘I feel that if I continue with this course, it will give me a great chance to change KAASO, Uganda and the World.’

If anyone can, Dominic will. 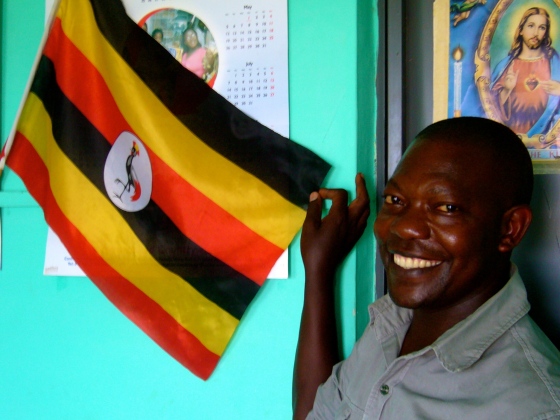 Dominic with the Ugandan flag