Time in Uganda is a funny thing. While a single day can seem to span for a week with so much happening and so much to get your head around, somehow a week can pass in a day, leaving you wishing there was more time. This time two weeks ago I was arriving in the village; in just one week I will be on a plane home. I wish there was more time but I am ever grateful for my annual visits, especially this one which made me realise with newfound intensity just how much I value my time in Uganda.

Last Sunday was KAASO’s Speech Day which was a huge celebration marking the end of the school year, combined with the graduation of the gorgeous nursery children who are now promoted to Primary One.

It was a moving day, with children of all ages performing before their parents and guardians, singing, dancing, drumming, moving and shaking. I was so proud watching them all, those I first met almost six years ago, now all grown up. Brenda did an incredible job of her performance and received a huge reception from the crowd.

Dominic gave a heartfelt speech thanking me for all I had done for KAASO and I was humbled by the gratitude and kindness that flooded my way from everyone I met. I still marvel at how far this school has come over the past few years and how lucky I feel to have stumbled across this very special little corner of the world, nestled in a tiny village amidst banana palms and mango trees.

Speech Day ended with a disco which saw people from 3 to 93 up dancing in the school’s front courtyard. We were hugely fortunate that the rains held off as we’re in the midst of the rainy season and the previous day had seen the most torrential downpour I’ve ever experience in Uganda with pounding rains turning dust to mud, flowing in rivers through the school for hours. I can’t help but smile as I write, as the thumping music from a nearby bar pounds out “I bless the rains down in Africa.”

In the midst of the dancing, the school year officially ended and the children started to flood out of the school gates with their mattresses, metal suitcases and worldly belongings on their heads. I tried to farewell everyone but it was overwhelming trying to take in the mass exodus of over 500 children who marched like ants out the school gates, spreading out across the country for the holidays with parents, grandparents and distant relatives. 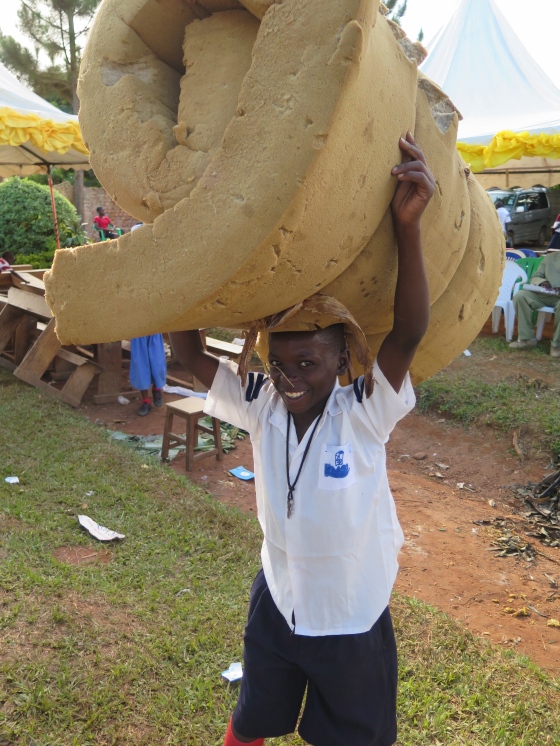 The consolation of all these departing children is the return of the sponsor children and every day it seems I am met with another flying hug from a newly returned secondary student. The children I met in 2009 are now 18 and 19-year olds who dwarf me and have matured into a bunch of incredible young adults. I went to Masaka on Friday to pick up Henry and David from school and beamed with pride as these two handsome young men in crisp white shirts and ties showed me around their school, grinning as they explained their responsibility to set an example for the younger children as they are now the ‘elders’ and role models of the school – next year is their last year of secondary school before they will head out into the world. 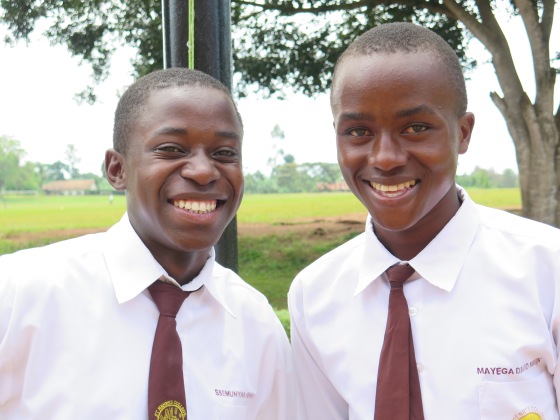 It makes me so immensely proud to see all these grown up students back at KAASO, helping around the school and guiding and inspiring the younger children. I have been meeting with each of the sponsor students, catching up on their year, hearing of their hopes and dreams and what they hope to become given the incredible boost they have had by being sponsored through secondary school. I listen to their dreams of becoming doctors, vets, pharmacists, nurses, businessmen… Most importantly, what has impressed me this time is that these students have grasped the concept that their sponsorships are not everlasting but amazing head starts in life which they must not take for granted. Those that are approaching the end of their studies are mapping out their next paths, working out how they can cultivate gardens and set up poultry projects and get jobs to help support themselves and their families and fund the next stages of their lives. It has been so heartening to meet with them all and to feel the overflowing gratitude towards their sponsors that pours from each and every one. I started this project five years ago, having no idea where it would lead, never imagining I would now have over 20 children being given the simplest gift of all, one we so often take for granted – an education.

While sitting with one of the sponsor students last week, a new idea was born, one I hope will set a precedent and be the start of something truly incredible. He was explaining to me that he wanted to create his own tomato garden in the holidays which he could harvest before going back to school in early March. He lost both of his parents and in the holidays stays with his grandmother not far from KAASO in her small mud-brick hut where she takes care of half a dozen other orphaned grandchildren. He explained to me that his grandmother had a plot of land she was willing to give him for the project, all he lacked was the initial capital to get his tomatoes in the ground. Sitting together on the floor of my room, I listened intently as this 18-year old boy carefully explained the process of creating a tomato garden, the materials required and the costs involved. I was well and truly impressed. I gave him a blank sheet of paper and told him that if he could come back to me with a detailed budget and plan as to how he would achieve his goal, I would lend him the money. He looked at me in shock, clarified that I was serious, thanked me profusely and disappeared. Two hours later, he was back, budget in hand. Under the supervision of Teacher Sarah, the project is now underway and it’s something I hope will be the first of many such student-driven initiatives. It’s incredible what can be achieved with a whole lot of determination and a little bit of capital. He has been busy slashing the land with a machete and purchasing seedlings and manure and when I went to visit the land one evening he just smiled at me and said, “Madame Emma, thank you so much. Really, I am appreciating so much.” I can’t wait for the first bite of juicy tomato when I return next year.

With another volunteer at KAASO and a couple of others we picked up along the way, I ventured west to Queen Elizabeth park. I had never been to the Western Region and was amazed at the contrast in scenery. While Kabira overflows with green banana palms, fertile crops and striking red earth, Queen Elizabeth was a dry savannah with the spectacular Mt Rwenzori rising in the background, lakes George and Edward glistening in the sun and on the distant horizon, the hazy mountains of the Democratic Republic of Congo. We followed packs of lions, were chased by territorial bull elephants, trekked chimpanzees through the rainforest and dined in the light of paraffin lanterns under the stars. It was amazing to see another part of Uganda and the vast diversity of this country, smaller than New Zealand in landmass but with a population almost 10 times our 4 million people.

I travelled to Kampala yesterday, bumping into Kim along the way and we caught up on the progress of her malnutrition ward and the gardens she uses to feed her young patients during the crowded bus trip north. Dominic met me off the bus and together we met with solar companies in Kampala. Tomorrow morning I will travel alongside a solar technician back to the village as co-pilot in the truck of Solar Energy for Africa, hopefully one step closer to getting the solar system sorted. I had a lovely to catch up with John, a Kiwi friend who moved here in 2009, and his gorgeous two-year old daughter and have enjoyed staying with my dear friends Sonia and Paul, who I first met in 2009. AFRIpads, their business of washable sanitary pads has gone from strength to strength and is now helping girls not only in Uganda but in refugee camps and disaster areas around the world to cope with their monthly periods.

Every time I come to Uganda, I learn more and more about this country, its people, culture and life in the village. It’s a world of contrasts, a world that is deafening and peaceful, frantic and slow, contradictory and yet somehow, somehow, things make sense.

One thought on “And rain will make the tomatoes grow”