On this, my final day in Uganda – for now – the heavens have opened and the rains are falling. Unfortunately not on the crops of the village but on the capital of Kampala, where rivers of mud flow through the streets and the traffic has come to a standstill. It’s hard to believe I have come to the end of my time here, and this past week has been full to bursting, trying to fit in every last minute task on my list, saying a thousand goodbyes and sharing countless hugs.

Last Saturday we had a wedding at KAASO for some of the school’s neighbours who tied the knot on our school field. In the days leading up to the wedding the school was a hive of activity, with friends and relatives arriving throughout the day and night and Rose and Teacher Sarah running around preparing mattresses in the classrooms to house the onslaught. I was dressed in one of Rose’s beautiful satin gomesi, the traditional Ugandan dress, and was inundated with praise for how smart I looked from every man, woman and child. A muzungu in a gomesi causes quite a stir in the village.

A Ugandan wedding is like nothing you have ever seen. Over 1,200 chairs were lined up under circus-top marquees and strings of lights, flowers and lace criss-crossed in between, leading up to a giant central maypole. No sooner had the bride and groom entered with their entourage, than the rains came crashing down. Thunder and lightning filled the sky as over a thousand of us tried to squeeze under the sodden tents. I had Brenda with me and we huddled together until the tent looked set to crumble and the water was past my ankles; we decided to make a run for it. We splashed our way across the water-logged field and took refuge in one of the classrooms, where dozens of others had had the same bright idea. Taking a seat on a damp mattress on the floor, Brenda promptly fell asleep in my lap while we waited for the rain to stop. Two hours later, the skies cleared, the marching band recommenced and the festivities continued. We ate and drank and danced until I finally snuck away with Brenda to get some sleep, waking at 5:30am to hear the music still blaring from the field. Ugandans sure know how to celebrate.

Before coming here, I had had a generous donation from a friend who suggested I throw a Christmas party for the children. I ran the idea by Rose and it was quickly decided that we would use this occasion to bring together all the sponsor children to celebrate, along with those few children remaining at KAASO for the holidays. Rose and I hit the Kyotera markets, buying sacks of rice, bargaining for bunches ofmatooke, selecting tomatoes, avocados, cabbages and potatoes. In the midst of it all, the car broke down and several hours ensued with me at the garage, somehow having lost Rose, driving around Kyotera in circles, eventually finding her at a roadside stall where she’d gone to visit Dominic’s sister. It was dark by the time we got back to KAASO where I was grateful for our team of helpers who magically appeared to unload the car for us.

The day of the Christmas party, we awoke at dawn. Sacks were laid across the dirt courtyard, giant cauldron-like pots lined up, fires were lit and the peeling began. The sponsor girls were responsible for the food while the boys slaughtered chickens then decorated the school ‘hall’ (three of the classrooms with the wooden petitions removed). I made myself scarce for the chicken slaughter but enjoyed helping with the decorating. I had bought Christmas decorations while in London staying with my brother and the children delighted over the flags, banners, streamers and mini Christmas trees I pulled from my bag.

Henry came to me in the midst of the proceedings and asked if we should get a real Christmas tree. I looked at him in surprise. Really? Before I knew it, we were driving to his house 20 minutes from KAASO where we were met by his smiling mother who produced a wonky ladder and a machete. Henry scaled the ladder and was soon hacking at branches with the machete until they tumbled down on his little brother and sister who gathered them below. It looked nothing like our pine Christmas trees but smelled the same and I was grinning all the way back to KAASO, Dominic’s car filled with the smell of Christmas. 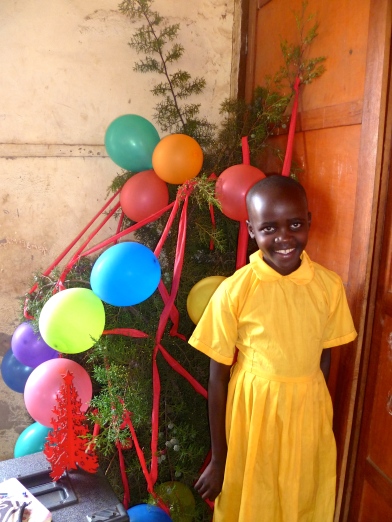 A feast to rival any Christmas dinner was served and the children ended up needing two plates each to hold all the food Rose and Teacher Sarah dished up to them. They couldn’t contain their grins as the hall was filled with happy faces, savouring every handful. Lunch was followed by a meeting of the sponsor students, mapping out the next few years and outlining the importance of working hard to make their sponsors proud. Rose gave an inspiring speech about ‘doing a Dominic.’ Dominic was one of 27 children whose mother died just after he was born. His father’s other wives did nothing to help him and he was essentially on his own to make his way in life. He put himself through school, working on the headmasters’s gardens, digging on people’s farms, doing any odd job he could find to help keep himself in school. Rose explained to the children that they were among the privileged few in Uganda who did not have to worry about fees so they should work extra hard to make something of themselves, to demonstrate to their sponsors that their ‘investment’ was worthwhile. Night fell and Dominic set up a disco – a laptop connected to speakers outside his house and the music blared as we all danced under the stars.

I want to take a moment to acknowledge and thank our amazing sponsors – Jo & Ross, Don & Gendy, Di & Ross, Judy, Shelley, Margaret, Catherine, Matt, Quinny, Cherie, Stuart & Deidre, Melanie & Bruno, Jan and Simon. You are doing more than you realise. If anyone else is interested in sponsorship, there are still children in desperate need of assistance as well as a few who have started secondary school who will be forced to drop out next year as their sponsors have disappeared off the radar and in spite of my attempts to find them, I cannot.

Chickens continue to fill my days in Uganda. During my time at KAASO, I went through the school priorities list with Dominic and Rose and we have decided to use the donations I have been receiving to complete the poultry project started by a previous volunteer. Dominic and Rose will tomorrow be driving back to KAASO with 200 chickens in the back of the car. A truck came the other day with literally one ton of chicken feed and the troughs and drinkers are ready and waiting. The idea is that within 9 months the chickens will be laying eggs so that every week the children will each receive an egg and the remaining eggs can be sold to help keep the school running. It’s a brilliant initiative which Dominic and Rose are both really excited about. I’m only glad I won’t be in the back seat on the return trip to the village…

I left KAASO yesterday after one last music session in my empty room with my little friends and tried not to weep as they sang ‘Leaving on a Jet Plane’, one of their favourites. They carefully packed away the guitar for my return and it was time for me to go. Henry saw me off with a hug and a smile – ‘Madam Emma, we will meet!’ I was at the wheel and Dominic and Rose’s entire family were coming for the journey so we were a total of 11 passengers in the car, a sight to see… We intercepted Kim along the way for a quick farewell on the side of the road. Kim has been living in Kabira now for over seven years and the work she does is beyond incredible. She has set up a children’s malnutrition ward at the local clinic in Kyotera where she does all she can to save these children who come in as tiny skeletons, desperately trying to nurse them back to life. Her strength, determination, compassion and caring are incredible and I am so proud of what she does. An amazing friend doing amazing things.

Further up the road towards Masaka, Dominic suddenly asked me to pull over. There was nothing for miles but a small pathway which apparently was the way to Brenda’s grandmother’s house. Brenda’s mother died just after I left KAASO in 2009 and her father also died earlier this year – both of unknown causes. When I had told Brenda the day before we were taking her to her grandmother’s her face lit up. ‘I LOVE my jajja (grandmother)!’ she grinned. Dressed in her best yellow dress, we left her on the side of the road, gave a small boy 20 cents to carry her suitcase on his head and with a small wave, she was gone, off up the path. In Masaka we dropped off Teacher Sarah, her little Jonah and Juliet, one of the sponsor children who was going to help them for the holidays. Teacher Sarah beamed and took my hands – ‘Madam Emma, there are no words for what you have done. We will miss you. Come back soon!’ The three of them jumped on boda bodas and were gone.

In Kampala, we waited in a carpark for Stellah’s mother to arrive. Eventually, she came in through the gates, her tiny frame swamped by her oversize t-shirt and long skirt. She knelt at my feet and thanked me over and over again saying she had nothing to give me but that she hoped that God would reward me with eternal blessings. She didn’t even have the money for the trip to her mother’s house where she was taking Stellah so I gave this to them and was, yet again, humbled by her gratitude. It was Stellah’s birthday yesterday and I sang to her and gave her gifts and a card in the morning but the rest of her day was spent wedged in the back of the car amidst the sacks and suitcases. She cried as we said goodbye and I held her close and promised to come back soon. I watched them as they stood on the side of the road trying to find a bus going their way, my heart breaking.

And now it’s time for me to leave. Dominic, Rose and their five children are all coming to take me to the airport, the biggest Ugandan send off I have ever had. Last night I met Rose’s mother for the first time and held her tiny nephew, the 5-day old son of her sister Agnes and, more than ever, I really do feel part of the family now. It’s an amazing feeling knowing that there is a family, a school, a village and a community on the other side of the world always waiting to welcome me with open arms. I will forever be returning to this place that still baffles and confuses me endlessly, but that I have well and truly fallen in love with.