I left this place with a promise to return. Whether or not anyone else remembered my promise, I certainly did and I know I would not have felt complete had I not honoured my word. To return at all was a dream come true. And to return with both my parents was beyond a dream.

After so much time away you can’t help but wonder if the children will still remember you, one of many volunteers to have made the trek down this red dirt road and I worried that maybe time had washed away the sense of belonging I once felt here.

From the minute we touched down on African soil I felt an overwhelming sense of belonging, a warmth that extended past the heat of the day and a feeling that everything was in its place; I had come home. Dominic greeted us like the long lost family we came to realise we were to him, engulfed in emotional hugs. We spent a night amidst the chaotic rumbling of Kampala where you feel as if nothing is ever still and if you pause for too long you will be carried away by the crowd.

The road back to KAASO took my breath away. It felt as if I had never left as we flew back over dirt roads, through villages that had changed little in my years away, the urban quickly giving way to rural as banana palms overtook the roadside and buildings turned to mud. We arrived late at KAASO in the black of night and I assumed the children would be sleeping. Yet again, I was wrong. There was a cacophony of sound as from the darkness emerged a hysterical mob of children who would have carried away the car like a sea of ants had we not quickly jumped out and instead let ourselves be engulfed by the swarming crowd. Little hands fought to find my skin with cries of ‘Madam Emma! Madam Emma is BACK!!!’ White teeth and eyes smiled at me through the night and as their cries turned into song, my tears fell freely. ‘You are my Sunshine’ merged with ‘In the Jungle’ and the guitar soon came out for an impromptu rendition of ‘Que Sera Sera’, little bodies swaying, overcome with joy. I was home. 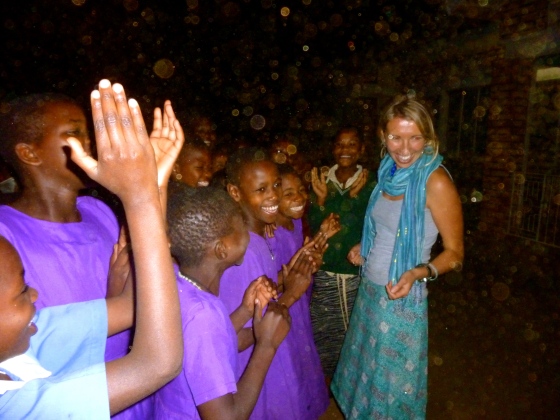 There is always the worry that in returning somewhere, things will have changed. Here, I had feared that perhaps this would be for the worst. I was crazy to have doubted for a moment. Dominic and Rose have taken this school, in the words of Ivan and Miral, from good to great! Kiwi House still stands as proudly as ever, there is a full-time librarian in a library complete with books, the other volunteers here have been taking daily computer classes on the laptops we left behind, there is a live-in nurse in the sick bay Cherie so lovingly painted in the hope that one day it would be used for its intended purpose and the children are still laughing, smiling, living, loving – and singing. Even the new children know every single word to the songs I taught in 2009. It is overwhelming.

My parents embraced Ugandan village life as surely as it embraced them. They bathed in buckets, ate with their hands, slept cocooned in mosquito nets, exchanged endless greetings and thanks and inevitably fell head over heels with KAASO. Yesterday I watched on as dad (who everyone calls Daddy) put the finishing touches on the wooden storage boxes he had been constructing with the help of several enthusiastic aspiring carpenters of varying heights, ages and abilities. Mama (who now goes by Mama Emma) sat reading stories to the children as others wove her hair into a tangle of braids. Together we have taught classes and drawn pictures, shared beers and pork as guests of a local Rotarian, sung an endless stream of old songs and attempted to teach some new ones, eaten countless plates of matooke, been guests of honour at an 8-hour long school music and dance performance, explored Kyotera with its long-horned cows, hawkers, children and chicken roaming the dusty streets, washed clothes in buckets of pond water and watched the sun slowly slide over KAASO hill. It has been incredible to see the way this place has stolen the hearts and minds of my parents in the same way that it did to me over two years ago.

Sitting in the library one night, Dominic tried to put into words his incredible happiness that I had returned with my family, explaining that he could never have imagined arriving at this point, from growing up with nothing, not even a pair or shoes to hosting international guests from across the world. His gratitude, as ever, is truly humbling. 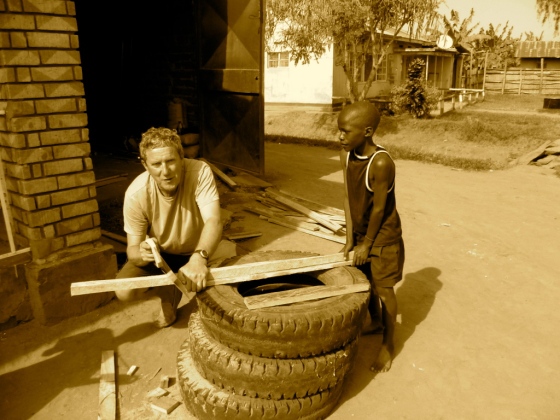