It never ceases to amaze me that in a country characterised so fully by ‘Africa time’ you can still feel as though you have lived a week in a single day. Every morning I write a huge list of all the things I hope to get done and every evening I laugh at myself as I see how few of them I have actually managed – and yet the days are so full that I often can’t remember the morning by the time I go to bed. Full and fulfilling.

So much has happened since I last wrote that it’s overwhelming to try and choose what to share with you in your far-flung corners of the world. I have sat on a white sand beach and watched the sun set over Lake Victoria, travelled over more potholes than I ever thought possible in one road, danced at a traditional wedding ceremony amongst over 1000 Ugandans, joined the school choir singing in three part harmony in Luganda, attended an inspiring and heartbreaking AIDS workshop, helped at a fundraiser for an incredibly poor school near the Tanzanian border, shared a beer with the Chairman of the district and watched hundreds of school children perform in a music festival under a makeshift marquee held up with sticks. And that’s just the last week!

The Ssese Islands were stunning. Breathtakingly so. After one of the longest short journeys of my life (how can you travel so far and cover so little ground?!) we arrived, barely recognisable we were caked in so much dust, at a campsite by the shores of Lake Victoria. We were overwhelmed to see so many fellow muzungu, it almost seemed indecent to see people in bikinis after so long of our modest village dress. It was amazing to enjoy a beer that was actually cold and to meet an mixture of interesting people from around the world who had been volunteering and travelling in various parts of Africa. The sunset was spectacular over the lake and as we sat sipping our drinks it was easy to forget where we were. There is a kind of bitter-sweet feeling to be somewhere so overwhelmingly beautiful as it’s constantly undercut by guilt at being so lucky to enjoy such paradise while so many suffer.

We met a local boy working at the campsite named William. He had dropped out of school last year when his father died and his mother was unable to pay for his school fees. He was spending this year working to try and save enough money to finish his final year of secondary school. He was 22. The dedication to education here is phenomenal, if children back home had any idea how hard people here worked to put themselves through school and just how devoted they are to their studies – it’s inspiring! We returned to KAASO dusty, battered and bruised from another epic journey crammed into a taxi van with 20 people, 10 sacks of sugar, 4 babies, more bags than I could count and no doubt a chicken or two had found their way in… It felt good to be ‘home’.

Last week we attended a workshop on HIV/AIDS held at a school down the road. An amazing organisation called Youth for Destiny has set up an education programme for primary school children aimed at teaching them the dangers of HIV/AIDS and so we tagged along, curious. We entered a barren concrete classroom decorated with nothing but a hand-drawn poster detailing the inner workings of the ear and a calendar featuring the Father, the Son and the Holy Spirit. The two men taking the workshop were a bundle of energy and incredibly passionate about what they were doing. The very first thing they did was write up on the blackboard – VAC. ‘As of today, you are all part of VAC. What does that stand for?? VIRGINITY ABSTINANCE CLUB! Repeat after me: Virginity Abstinance Club!’ We were off to an interesting start…

After pledging to be part of this club, with a few sideways glances passed between us over-12s, the day began. It was inspiring beyond belief. Fifteen children had been chosen from KAASO to attend the workshop and they spent the day being trained in how HIV is contracted, how it can be avoided, the consequences of getting AIDS and teaching them life skills and how to be strong enough to stand up for themselves. These children will then go out to other schools in the district and teach what they have learned – the education is coming from the children themselves which is infinitely more powerful than any adults dictating what the children should and shouldn’t do.

Kenneth, the man leading the workshop finished with a passionate plea to the room: ‘We want to save the next generation, we want a generation which is AIDS-free. Go home and tell your family and friends that AIDS kills and that if we all continue the way we are, we will die. Don’t just keep quiet but try and help to be a good citizen. That way we can help to build the future of Uganda – a generation that is AIDS-free. Are we together?’ This was met with a resounding ‘YES!’ from the children. It was inspiring; these children are mostly under 12 and yet taking their future into their own hands to try and conquer this epidemic that has crippled their society for so long now. They are so passionate, so determined, I hope with all my heart that they will be successful.

Every day brings new joys, new wonders, new challenges. Sometimes there is guilt, there is helplessness, there is a sense that you could be doing so much more – but what? Yet despite all this, there is ultimately the overriding feeling that there is nowhere I would rather be. I look at the map on my wall and marvel at the fact that I am in Africa, this mysterious continent I have dreamed of for so long, that despite common perceptions, is a place of such colour and light – not darkness. Last night a little girl called Carol was crying like the world was ending and I took her in my arms and she wouldn’t let go. I sang to her songs from my childhood until she finally began to fall asleep. I took her back to her dorm to find faces popping out from the three-tiered bunk beds, big eyes fixed on me. I put her to bed, a sheet-less mattress she shares with her sister and we all sang their favourite song – ‘Twinkle, twinkle’ until I realised they were getting far too excited and would never get to sleep. It’s the little moments, the one-on-one time with these children who are too young to be without parents, without that human touch. Sometimes you feel you need 600 arms to hug each and every one.

In the absence of that, it’s one hug at a time. 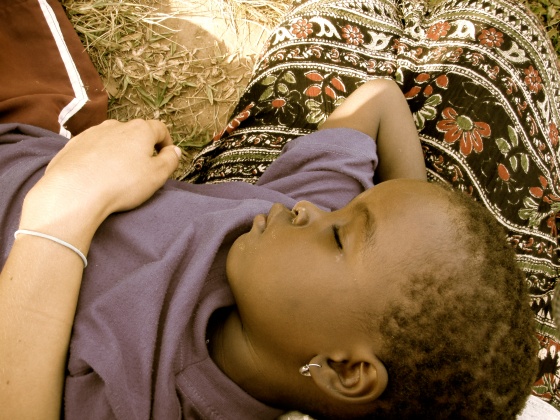