Another scorching day in the town of Kyotera where children still run down the street chasing us with cries of muzungu! I don’t think I will ever again feel so famous as I do in Uganda. It’s funny that after almost a month here we feel as if we are beginning to blend in, yet every time we venture outside the grounds of KAASO we are reminded of how much we stick out, the colour of our skin blinding white in contrast to these faces that live under the scorching African sun.

The last few days have been yet another whirlwind adventure – the story of my life currently. Dominic took us to the government school that he runs down near the Tanzanian border. It was an eye-opener to say the least. All the time we have been here we have been taking our perception of ‘norms’ from KAASO, overwhelming though they may be. Kamuganja School was another story. Located in the middle of nowhere, it serves a community that largely consists of Rwanda cattle herders that fled their homes during the genocide of 1994. The people carry the scars of unspeakable tragedy and the children are understandably affected. The families are scattered far and wide around the surrounding area and to get to school, some children must walk over two hours and be ferried across a river, an offshoot of Lake Victoria, by boat if they can find one. There were less than 100 students here when Dominic took over as headmaster two years ago; now the school roll is over 300. The community is extremely poor and although being a government school there are no school fees, there is no provision for such things as uniforms, resources or even lunch. Most families cannot afford even to pay for the children’s lunch which consists of one cup of watery porridge to sustain them for the day. For some, this may be the day’s food.

So we arrived at Kamuganja to be met by 300 faces, half thrilled, half terrified who clapped and sang for us as we bumped our way along the dirt road. Dominic stopped the car for us to get out and walk amongst them into the school grounds. The red earth felt like a red carpet. They were so genuinely grateful to simply have us there and it was overwhelming to say the least.

We went from class to class and were sung many beautiful songs in Luganda by the children who couldn’t stop giggling at these strange muzungu in their classrooms. We sang them our national anthem which they found hilarious. We really need to work on a better repertoire…

That night Dominic took us to the Tanzanian border – the town of Mutukula, a sprawling array of shops and markets that straddles the two countries. Somehow, in the usual madness that is this life, we managed to fit 11 people in the car on the journey down there. No load is too great for Dominic’s sedan! We approached the border at dusk and after a few words with the border guard standing clutching his massive gun, the barrier was lifted and we officially entered ‘no man’s land’. Unwilling to stop there, Dominic continued on to the secondary border control where he explained to the customs officer that we were all the way from NZ, had never seen a border before as we were an island nation and would desperately love to step into Tanzania. ‘Of course they must proceed,’ was the reply. All smiles, our slightly random team of three kiwi girls, an American couple, Dominic, the local priest, two teachers and their infant children marched across the border and into Tanzania. On the Tanzanian side, the same story was repeated to the Tanzanian customs officer who smiled warmly and welcomed us into his country. Even if just for 15 minutes. It was hilarious to have walked from Uganda to Tanzania and all of a sudden we were saying Jambo! to all who passed. We headed back over the border for dinner and a beer in an outdoor restaurant that was lit solely by a TV which blared Ugandan video clips. It was highly entertaining.

But the night was not without its usual dramas. When we went to leave, we found out the border had closed at 10pm and we were officially stuck in no man’s land. Dominic worked his wonders and the barrier was lifted. Then, of course, we ran out of petrol. We parked in a deserted petrol station and waited. Us muzungu were in the car with the priest and he turned to us to ask about what music we wanted to listen to. ‘How do you like country?’ While trying to work out quite what the right answer would be, he swung in a country CD and the rest of the night was spent singing to Kenny Rogers in the dark. What seemed like hours later, Dominic reappeared with a jerry can of fuel. He had walked back into Tanzania and somehow managed to find some petrol. He really is a legend.

The following day we watched a football match between the Kamuganja kids and another local team. The other team was decked out in full uniforms and football boots. Our kids were in torn clothing with bare feet. The game was a walkover (to the other team – our kids were trying not to get their feet trampled!) but I did meet a couple of gorgeous boys from the local high school. They were 13 years old and desperate to learn English. They wanted to come to NZ and when I asked them what they wanted to do when they grew up, they replied they wanted to be lawyers. And their names? Joseph and Innocent. Yes, Innocent is a name.

The journey back to KAASO was the typical madness, 7 in the car, a beer with the mayor of Rakai District who was thrilled to welcome us to his country, a fly-by of Kyotera and finally we made it back to KAASO, horribly late for the school disco that was being held. I got out of the car and was bombarded by kids hugging me and grabbing my hands. They started singing and before I knew it, I was standing in the school hall (the classrooms with the flax matting walls that separate them removed) with hundreds of children singing happy birthday to me. There was a beautiful table that looked like the head table at a wedding set up for me and the girls – the guests of honour or ‘celebrities’ as they called us – with sodas, beers and a huge pink birthday cake. One of the teachers was the MC and dedicated every song to ‘Madam Emma’, the children danced for me, the teachers made speeches, they had hired a local DJ to come in with his own generator and when the children took my hands to take me to dance as they sang happy birthday to me in Luganda, it was all I could do to stop the tears from falling. Here I was, in the midst of such poverty surrounded by people who had gone to so much trouble to make a fuss of me on my birthday (well, almost my birthday – I didn’t have the heart to tell them it’s actually tomorrow). We danced to local Ugandan music until the children were almost asleep and we were melting in the heat. It was one of the best birthday celebrations I could ever have imagined. 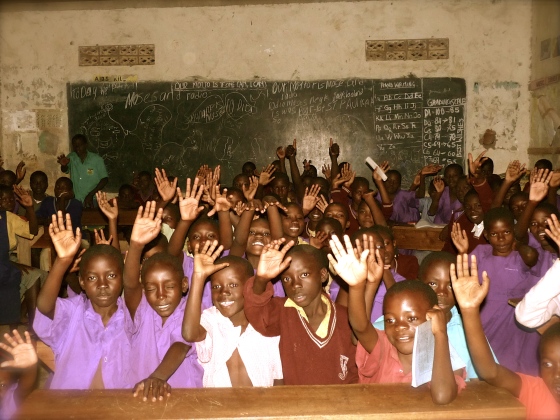 The sun is slowly sinking and it’s time for me to jump on a boda boda to get home before it’s too dark to dodge the potholes in the road. I’m learning each day to take time to appreciate the little things – a smile, a little hand in mine, a mismatched football game, a spectacular sunset or a crazy African birthday disco…